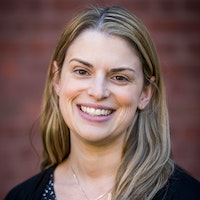 What are your thoughts on increasing lengths of wake time over that course of the day (2, 2.5, 3 hours for example), vs. the same wake time (such as always 2.5 hours)?

I don't love that approach at all. In my experience, by the end of the day, babies and toddlers typically need their SHORTEST wake time.

How old is your child?

At 6 months, my recommended schedule is:

Would you wake the baby if he's sleeping? Or what if they wake earlier? He tends to wake around 5, and I have a hard time getting him back to sleep without nursing or bringing him into bed with me.

I would definitely wake if he's still sleeping at 7. If he's awake before 6, I would not get up and start the day with him any sooner than 6 a.m.

Hi Arielle!
I know we've touched on this before. Could you talk a little more about what the best way is to make the switch to a toddler bed and why it's best to wait? Thanks!!!

Hi Arielle,
I totally missed this pop up because of bedtime! Hopefully you can answer my question anyway. My almost 4 year old has been consistenly napping everyday for about 1-2 hours and going to sleep around 8:00/8:30 at night and sleeping until 7:00-7:30. All of a sudden on Wednesday he decided that he was not going to take naps anymore and on Friday he climbed out of his crib and has been doing it ever since. He has been a hot mess since then. We have been telling him to stay in his room and rest which for the most part he has, but he is so exhausted and over tired so today I tried to force it by telling him he had to stay in his crib. I let him bring some small legos in the crib with him and rubbed his back but he still wasn't listening. I left and he did stay in his crib until his bunny clock woke up. He has been going to bed between 6:30 and 7:00 but he isn't sleeping long enough to compensate for the loss sleep during the day. He was up before 6:00 this morning. A couple mornings he woke up really cranky and a couple mornings he woke up fine but he has consistenly been a mess by 4:00pm. I really don't think he is ready to give up a nap because he is so tired but I can't force him to sleep. I wonder if we should bite the bullet and get him a bed and then I could potentially lie down with him in the afternoons until he falls asleep but I'm not sure what the best thing to do is. I can't deal with this miserable child everyday! Please help!

It's very common for children to go through a difficult stage when they are dropping their nap. It does, indeed, sound like he is dropping his nap. Given his age, I would definitely get him a toddler bed and then begin using what I call a "routine" chart. It's similar to a reward chart in that you would give him stickers and such as he completes various things in his sleep routine (including staying in his bed and his room). I would also recommend continuing with the early bedtime. You may even consider a 6 p.m. bedtime as he gets through this yucky in between phase of dropping his nap.

Let me know if you have any other questions!
Arielle

Suggestions on how to sleep train when little one might have separation anxiety? He is so calm when I lay him next to me on my bed but immediately gets hysterical when I put him in the crib. I have tried to lean over and cuddle him there when I put him down, or after a few minutes when he's still screaming, but it doesn't help.

That actually doesn't sound like separation anxiety, it just sounds like he's upset that you're changing things up on him! I'd do some research about sleep training methods and figure out which methods feel most comfortable for you to start implementing with him.

Getting toddler to sleep longer

My 2 year old sleeps from 7:30 to 5:30, but he's not actually ready to get up a 5:30. Usually he will sleep in bed with me for another 45 minutes. I've tried to leave him crying, but he never lays back down and then is a cranky monster until nap time. Is there anything I can do to get him to sleep a little longer?

Thanks for your question. Has he always woken that early?

That's actually an improvement. He used to get up at 4:30, but eventually he kind of worked it out himself to 5 and then 5:30.

Also, we have black out shades in his room, so I don't think it is the light.

Ah ok. So some kids are just early risers (just like some adults!). That being said, can you tell me what his daytime schedule looks like? When does he nap and for how long?

He naps from 12-2 at daycare pretty consistently. Sometimes on the weekend he will sleep from 11-1, but he still goes to bed and gets up at the same time. I wouldn't mind him getting up at 5:30 if he was ready to get up, but he doesn't seem to be.

Ok, I would try putting him to bed earlier. I know it sounds counterintuitive, but earlier bedtime leads to a later wakeup! Especially given when he wakes, I would aim to have him asleep no later than 7 p.m. I would also introduce an "ok to wake clock" and set it for 6 a.m. (for now). When the light turns green, it's "ok" for him to get up for the day.

We will give it a try! Thank you.

You're welcome! Let me know how it goes!